The Derby Silk Mill Museum is recognized by UNESCO as a World Heritage Site, because it stands as one of the world’s first major factories. This is one of the major attractions in the city of Derby, and it attracts visitors from all around the world every year. As an historic city, Derby offers numerous sights, great learning opportunities, and hosts a number of historical locations – including Pickford’s House and a Museum and Art gallery, in addition to the Silk Mill. 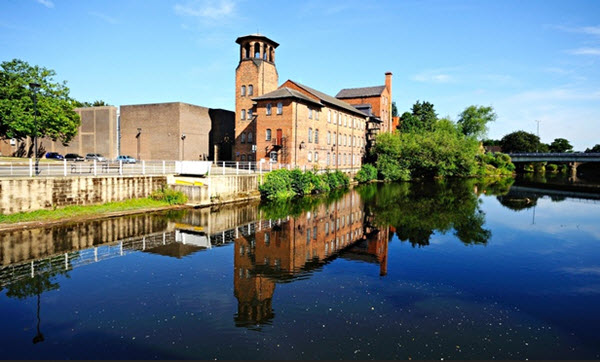 A Brief History of the Silk Mill

In the early 18th century, silk emerged as one of the most sought-after products in the civilized world. At the time, silk was very expensive and the preserve of the wealthy in society – especially the ladies. Only the Italians, at the time, had the know-how to manufacture silk.

The model was replicated in the English city of Derby, when a young man by the name of John Lombe cunningly obtained the manufacturing model. At the time, the secret of manufacturing silk was jealously guarded by the Italians, and leaking the secret was punishable by death. John managed to sneak into Italy, and managed to get employment in the silk factory as an engineer, where he studied the machines. When his cover was blown, he escaped back to England where, with the help of his wealthy brother, they began construction of the first major silk-manufacturing industry.

The biggest challenge at that time was how to generate the energy needed to power a big factory. They settled in Derby because it had a year-round natural supply of warm water sufficient to power a super-factory. As a matter of fact, it became an inspiration to others, who proceeded to build mills all around the area. The Derby Silk Mill was built between 1717 and 1721. The design was simple: a large water wheel was created which, when turned by the force of the water, created enough energy to power large factories.

Unfortunately, Lombe did not live long enough to enjoy the fruits of his daring risk. Within a few years, he died in very mysterious circumstances, and many believed that the Italians had sent mercenaries to eliminate him. He bequeathed the management of the factory to his younger brother.

This is one of the first factories (if not the first) ever to exist in the civilized world. It was not only large, but of unrivaled efficiency. Industrial Unionism is believed to have started here. With this legacy, it has been recognized by UNESCO as a heritage site, which attracts millions of visitors every year. The mill is located in right in the heart of the city of Derby, a city which was of central importance to the Industrial Revolution in England.

Recently, the City of Derby has announced that it intends to renovate the museum to make it look more original, and also to inspire future innovation by offering more diverse learning opportunities. Events and visitors will be allowed into the facility until the end of 2017, and it is anticipated that the renovation works will be completed by the year 2020.