Aythorpe Roding Windmill is an old windmill in Essex that was in use until 1937. It was restored back to working order in the early 1980s and started grounding grain again on 3 March 1982. The following year, the mill was opened to the public.

The Aythorpe Roding Windmill is a post mill with a single-storey roundhouse. With a body meassuring 21 feet by 12 feet in plan, this is the largest post mill in all of Essex. It is 44 feet 3 inches to the roof.

The mill, which is winded by fantail, is equipped with four double patent sails on a cast-iron windshaft. The crown tree is 20 inches square in sections at the ends and 20 inches by 19 inches in the centre. There are two pairs of millstones in the breast of the mill.

The Aythorpe Roding Windmill is designated Grade II* on the National Heritage List of England. 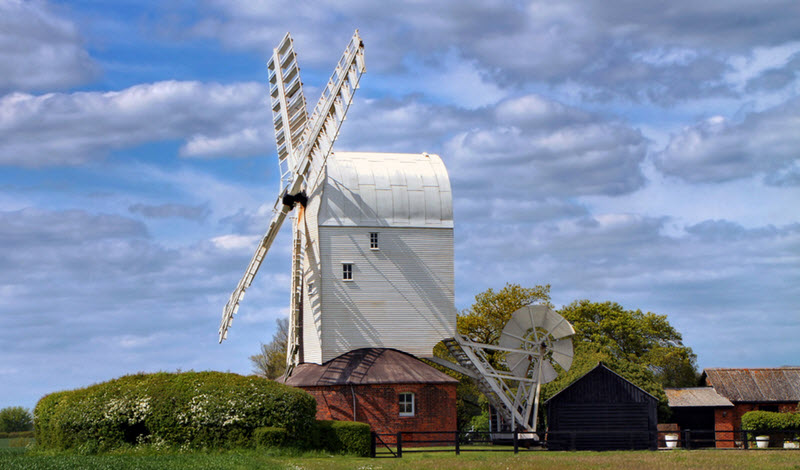 Aythorpe Roding is a village in the Uttlesford district of Essex in eastern England. It is located 9 miles northwest of the town Chelmsford.

The crosstrees are 24 feet long.

The upper crosstree is 10 inches by 10 inches in section. It consists of two pieces of timber that has been scarf jointed in the vertical plane, with an iron plate bolted under the join.

The lower crosstree, which is 13 inches by 12 inches, bears the date 1869. This is probably when the roundhouse was built.

The current windshaft is made out of cast-iron and fitted with four double patent sails.

The whindshaft was probably made for another mill and then eventually being purchased second-hand for the Aythorpe Roding Windmill, because it is longer than what’s required for this mill.

The brake wheel – which is 10 feet 2 inches in diametre – has a six-armed, cast-iron centre and a wooden rim.

The wallower is wooden, and was originally made for another mill.

The current windmill is not the first one on this site. Exactly for how long windmills have been on this spot remains unclear, but we know that there was one here as early as 1615.

The current windmill bears the inscription 1779 on a timber and was probably built in this year. In 1798, it as insured for £50.

Millers of the Aythorpe Roding Mill