Stretton Watermill is located in Stretton, Cheshire in England. It is a historic landmark for the county as in fact it is still a working mill. It has great importance in the country due to its mill machinery still being in working order and is now listed as a Grade II building as designated by the National Heritage of England. 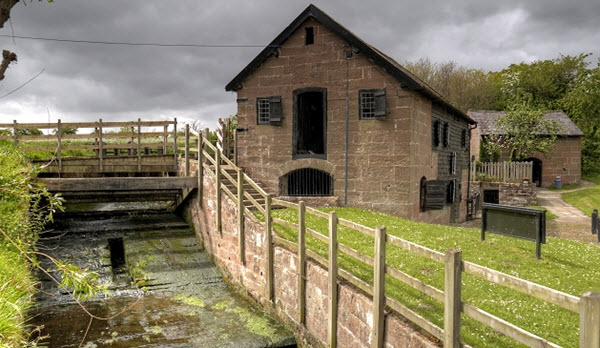 A Brief History of the Watermill

The mill dates back hundreds of years with the earliest recordings of its existence turning up in 1351 when the mill changed hands. By the 16th century the Mill was owned by the Leche family and it is from this time, around the 1630s that the oldest structure of the building remains. During this time the building was made from wooden framing and contained just one wheel. Later in 1770, William Leche extended the Mill, raising the roof and changing the thatching to slates. The timber walls were covered with stone and an additional overshot wheel was added, bringing the mill into the modern times of the day. All this work is recorded within an inscription stone, located on the west side of the mill. 1852 saw the wheel once again replaced, this time for one with a cast iron surround. By 1959 the mill had stopped being in operation and it wasn’t until the mid-1970s, when the Boucher brothers restored the building, that it was able to reopen. Since this time, and through funding from the Science Museum, the mill has become a museum.

A Description of Stretton Watermill

The main frame of the watermill is on a wooden framed core though as previously mentioned, over time this was upgraded to provide a stone outer face in order to protect the building and make it last a little longer. The extension was completed using bricks and incorporated a chimney as well. The original thatched roof was replaced with more weather resistant slate tiles.

The mill itself is two separate storeys, with the top level the grain-storage area and the lower level the area for the working machinery. Originally there was just one working wheel but with the extension came the addition of the second wheel. One is on the outside of the building, the other on the inside. The external wheel is a timber one, called an overshot wheel and is primarily what drives the machinery. The internal wheel is made of cast iron, named the breastshot and drives the Victorian made iron machinery. The upper level has four millstones and can be entered by climbing a steep staircase, whilst the grain loft itself can only be reached via a ladder.

Now the site is a museum complete with picnic area and a visitor centre. It opens from April to September each year to the public and offers free admission, though a tour around the interior is charged if there is a guide. The mill is still in operation allowing guests to see how it would have functioned in the past.